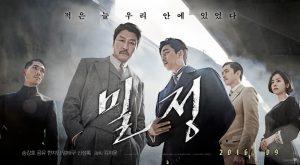 “The irresistible pull of a spy thriller, the heightened stylishness of a 1920s setting, and terrific technical specs make ‘The Age of Shadows’ an unabashed delight” – The Variety

“Kim Jee-woon’s ‘The Age of Shadows’ is a gripping thriller and a dazzling technical display that stands as the genre maestro’s most confident work to date.” – ScreenAnarchy

“The murky world of betrayal and counter-betrayal is reminiscent of Jean-Pierre Melville’s magnum opus ‘Army of Shadows,’ but the masterful orchestration of tension also shows the influence of Brian De Palma’s ‘The Untouchables’” – CineVue

After debuting in Hollywood with Arnold Schwarzengger’s action vehicle The Last Stand, director Kim (I Saw the Devil, A Bittersweet Life) is back on home turf, with what has been one of the most anticipated Korean films of 2016.

Set in the 1920s Korea during the Japanese colonial rule, The Age of Shadows follows Korean independence movement activists in their attempts to smuggle explosives from Shanghai so they can destroy the Japanese forces‘ facilities in Seoul. Featuring the acting talents of Song Kang-ho (Snowpiercer), Han Ji-min (TV series Rooftop Prince), Gong Yoo (Train To Busan), and an extended cameo by Lee Byung-hun (Terminator Genisys, The Magnificent Seven), The Age of Shadows had its world premiere out of competition at this year’s Venice Film Festival, and was recently announced as South Korea’s candidate for the foreign-language Oscar.

K-POP ONLINE DANCE CLASS 13 (BLACKPINK – HOW YOU LIKE THAT)