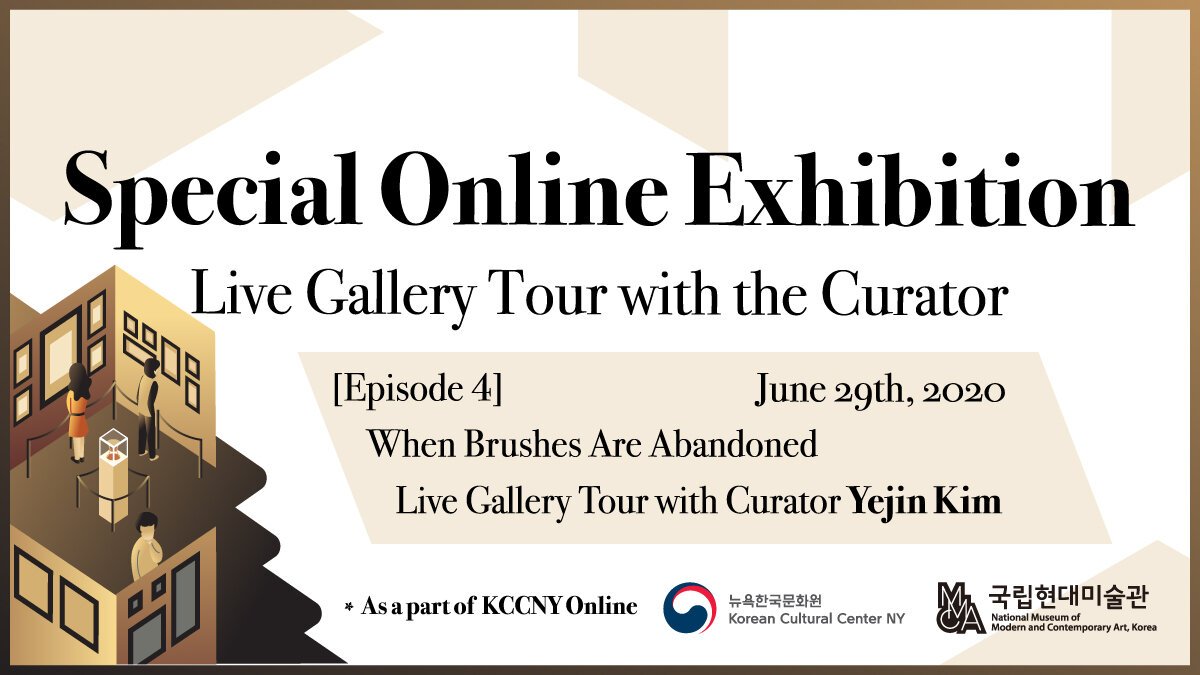 When Brushes Are Abandoned

Rediscovery of Korean Modern Artists is an exhibition series organized to reconstruct a major foundation of Korean art by rediscovering and spotlighting modern artists who have been under-evaluated in Korean art history. This exhibition is the first of the series, featuring works by six artists: ink color painters Jung Chanyoung (1906–1988) and Baik Yoonmoon (1906–1979), defector artists to North Korea Chung Chong-yuo (1914–1984) and Lim Gunhong (1912–1979), and pioneers of Korean contemporary art Lee Kyusang (1918–1967) and Chung Kyu (1923–1971).

Since its opening in 1998, MMCA Deoksugung has focused on introducing Korean modern artists and their works, beginning with Korean Modern Art Revisited (1998) and the Glimpse into Korean Modern Art series (1999) and leading up to exhibitions such as The Centennial Celebration of Lee In-sung’s Birth (2012), Lee Quede: An Epic of Liberation (2015), and Pen Varlen (2016).

Since its opening in 1998, MMCA Deoksugung has focused on introducing Korean modern artists and their works, beginning with Korean Modern Art Revisited (1998) and the Glimpse into Korean Modern Art series (1999) and leading up to exhibitions such as The Centennial Celebration of Lee In-sung’s Birth (2012), Lee Quede: An Epic of Liberation (2015), and Pen Varlen (2016).

The six artists featured in When Brushes Are Abandoned have produced significant series of works through the turbulent times marked by the Japanese colonial rule, liberation, the Korean War, and the post-war restoration period. The exhibition title reflects on the chaotic state of the times in which many artists gave up or were forced to give up art, and calls attention to the array of incomplete works remaining as testimonies. This exhibition looks back at the tempestuous times stained with prejudice against women painters, misunderstandings about ink color painting, confrontations of political ideologies, and the lack of understanding of plural art practice that caused artists to put down their brushes.

Part 1 introduces Jung Chanyoung and Baik Yoonmoon, a new generation of artists whose ink color paintings of flowers and birds as well as figures grasped attention at the government-supervised Joseon Art Exhibition. Jung and Baik were students of Lee Young-il and Kim Eunho, respectively, who emerged as new-generation representatives of Korean modern art only to be obliterated from the art scene post-liberation due to escalated prejudice against ink color paintings. This exhibition premieres a selection of Jung Chanyoung’s botanical illustrations and sketches donated to the MMCA by the bereaved family. The botanical paintings, produced by Jung in joint effort with her husband Do Bongseop who was also one of Korea’s first botanists, serve as archetypes of early modern botanical paintings.

Baik Yoonmoon followed in the artistic style of his master Kim Eunho to produce prominent series of color portraits, eventually perfecting a unique style of genre painting capturing the lives of the men at the time. This exhibition features one of his major works, Staking Everything One Has (1939).

Part 2 sheds light on artists Chung Chong-yuo and Lim Gunhong who ultimately crossed over to North Korea. Chung and Lim were active in the 1940s post-liberation art scene but have been excluded from the studies of South Korean art due to their defection to North Korea. Based around the countless real-view landscape paintings and sketches left by Chung and related archival materials, this exhibition highlights his career in both South and North Koreas. One of his paintings featured in this exhibition is Hanging Painting of Buddha in Uigoksa Temple (registered cultural property no. 624), a hanging picture over six meters in height painted in a radical coloring technique far-removed from the traditional Buddhist painting style. Lim Gunhong, who traveled back and forth between Hankou and Beijing in China, produced landscape paintings in a liberal style. Archival materials, including the tour brochure designed by Lim during his days as the president of his own advertising company, provide glimpses into the early stages of graphic design in Korea.

Part 3 illuminates Lee Kyusang and Chung Kyu, known as the pioneers of Korean contemporary art. The two took part in ‘the Modern Art Association’ and the ‘Invitational Exhibition of Contemporary Artists ’ and went on to spearhead the post-liberation contemporary art scene, but both died early (Lee at the age of 50 and Chung at the age of 49) due to illnesses, leaving an insufficient amount of works for proper study. In 1948, Lee founded the Neo-Realist Group, Korea’s first abstract art group, together with Kim Whanki and Yoo Youngkuk to become the first generation of abstract artists in Korea, but only ten works and little evidence of his artistic practices were found after his death. This exhibition gathers archival materials and interviews of his students and colleagues to reconstruct Lee’s life and course of work.

Chung Kyu started out as a Western-style painter and expanded his spectrum to woodcut print, book design, critique, and ceramics, yet evaluations on his work have been limited to his paintings and critiques. This exhibition traces the evolution of Chung’s artistic theme, which can be summarized as “modernization of tradition” and “industrialization of art,” and also introduces his ceramic murals, known to have been the particular subject of his devotion towards the end of his life.

©The National Museum of Modern and Contemporary Art(MMCA). All rights reserved.