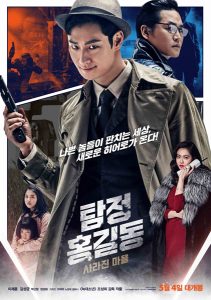 Inspired by the folk tale “The Story of Hong Gil-dong” (a Korean equivalent of Robin Hood), PHANTOM DETECTIVE is a stylish neo-noir thriller set in the unspecified past. Private investigator Hong Gil-dong (LEE Je-hoon, ARCHITECTURE 101, BLEAK NIGHT) has one goal in life: to find the one-eyed man who murdered his mother and exact revenge on him. It’s been 20 years since he witnessed the murder, and he finally has the culprit’s name: Kim Byung-duk. When he tracks him down to a hut in the countryside, instead of Byung-duk, Gil-dong finds Byung-duk’s two young granddaughters, who will become his unlikeliest sidekicks. As Gil-dong continues his pursuit, he will discover the truth behind his mother’s death and uncover a vast conspiracy.