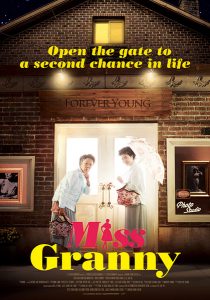 Mal-soon is a grumpy old lady whose family and neighbors have grown very tired of. When her temper puts her daughter-in-law in the hospital, her family decides that enough is enough – and it’s time to send her to a nursing home. Overhearing their plans, Mal-soon hides away from her family and magically awakens the next morning in the body of her twenty-year-old self! With no one recognizing her, Mal-soon decides to call herself Audrey for resembling Audrey Hepburn and embrace her newfound youth. She accepts her guitarist grandson’s invitation to join his band and enter a TV singing competition. This reverse take on BIG, one of Korea’s biggest box office hits, shows us that it’s never too late to embrace our youth!
0
FacebookTwitterPinterestWhatsappLINEEmail
vorherigen Post