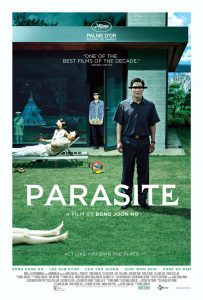 Meet the Park Family: the picture of aspirational wealth. And the Kim Family, rich in street smarts but not much else. Be it chance or fate, these two houses are brought together and the Kims sense a golden opportunity. Masterminded by college-aged Ki-woo, the Kim children expediently install themselves as tutor and art therapist, to the Parks. Soon, a symbiotic relationship forms between the two families. The Kims provide “indispensable” luxury services while the Parks obliviously bankroll their entire household. When a parasitic interloper threatens the Kims’ newfound comfort, a savage, underhanded battle for dominance breaks out, threatening to destroy the fragile ecosystem between the Kims and the Parks. By turns darkly hilarious and heart-wrenching, PARASITE showcases a modern master at the top of his game.

Parasite is the seventh feature film from the acclaimed Bong Joon Ho, following on from Barking Dogs Never Bite (2000), Memories of Murder (2003), The Host (2006), Mother (2009), Snowpiercer (2013), and Okja (2017). The modern-day classic Memories of Murder delves into the investigation behind a well-known serial murder case that was never solved, depicting the authoritarian era of the time with satire and sharp insight. The Host takes as its basis the abduction of a young girl by a strange creature that crawls out of the Han River, turning the monster movie genre on its head while also issuing stinging social commentary. Mother, the story of a woman trying to protect her son from a murder charge, is a dark portrait of motherly love taken to the extreme, while the SF film Snowpiercer portrays the last remnants of humanity in a future world that has been frozen over due to mankind’s overdone efforts to fix global warming. Finally Okja tells of the country girl Mija’s adventure to rescue the genetically-engineered „super pig“ she raised from the profit-driven corporation that owns it. Known for his cutting, socially incisive wit and twisting of genre conventions, Bong Joon Ho has continually raised questions about social institutions and the inequities of society with his unique blend of humor, emotion and suspense. In this sense, Parasite is both highly characteristic of Bong Joon Ho’s work, while at the same time evolving to a new level.