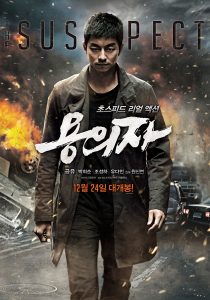 One of the hottest new action films from Korea, THE SUSPECT follows a North Korean spy (GONG Yoo), who is abandoned by his corrupt government and settles down in South Korea. Unfortunately for him, he becomes the prime suspect in the mysterious murder of a powerful CEO. The suspect, now hunted by a government that does not trust his innocence, has to uncover the truth and save himself before the clock runs out!