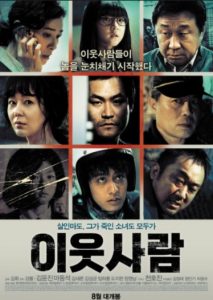 The Neighbors is an ensemble cast suspense thriller based on Kang Full’s 2008 WEBTOON of the same name. Schoolgirl Yeo-sun (KIM Sae-ron) is found dead after not returning home from school. Her stepmother (KIM Yunjin from ABC’s Lost) bears enormous guilt for failing to pick her up from the bus stop on that day and things aren’t made any easier by the presence of Soo-yeon (KIM Sae-ron), another girl in the same apartment complex who bears a striking resemblance to her. One of the residents of the building has been acting strange and many of his neighbors begins to suspect him, though they all hold back from telling anyone for personal reasons.