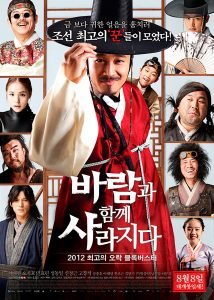 250 years ago, the people of Korea struggled under the tyranny of a power-hungry vice-premier who held a commercial supremacy over ice, the era’s most valuable commodity. Unable to stand his tyranny, Lee, an ingenious young man, gathers a group of experts in various fields: tactics, weapons, explosives, underwater diving, and camouflage… and, in an epic take on Oceans Eleven, executes a plan to rob the entire storage of ice that will be used for the crown prince’s birthday gala and ultimately bring about the downfall of their power-mad leader.