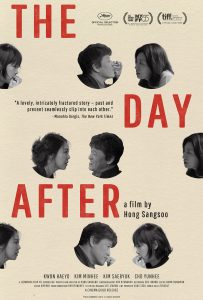 South Korean Master Hong Sangsoo’s 21st feature as director, The Day After, is a mordantly comic tale of infidelity and mistaken identity. Book publisher Bongwan’s (Kwon Haehyo) marriage is on the rocks after his wife (Cho Yunhee) discovers the affair he’s been having with his assistant (Kim Saebyuk). Now that relationship is ending too and Bongwan’s new assistant, the sharp and sensitive Areum (Kim Minhee), on her first day in the office, is left to navigate the fallout of all the turnover in Bongwan’s life.

With its ingeniously destabilizing leaps through time and stark black and white cinematography, The Day After begins as a darkly hilarious story of a man embroiled in extramarital entanglements but soon shifts—in a way only Hong can manage—into a heartfelt portrayal of a young woman on a quest for spiritual fulfillment.

„A lovely, intricately fractured story — past and present seamlessly slip into each other.“
— Manohla Dargis, The New York Times

Filmreview: THE HOUSEGUEST AND MY MOTHER (사랑방...