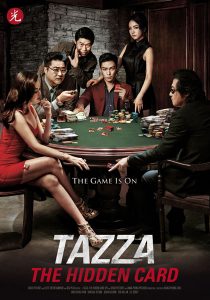 Dae-gil’s natural skills as a gambler have earned him the reputation of having a “God’s hand,” but dealing with in one bad move against swindlers, he loses his entire fortune. Having to unite with his legendary uncle’s old partner only leads to more dangerous situations, and soon, he realizes that this is a game of life or death! Soon, a deep conspiracy turns Dae-gil into a scapegoat and he’s forced to go on the run. Planning his revenge, Dae-gil prepares for the biggest game of his life… an event that will clear his name and hopefully reunite him with the woman he loves. Don’t miss this sensational thriller, starring T.O.P. (aka Choi Seung-hyun), the award-winning lead rapper of the K-pop group Big Bang!