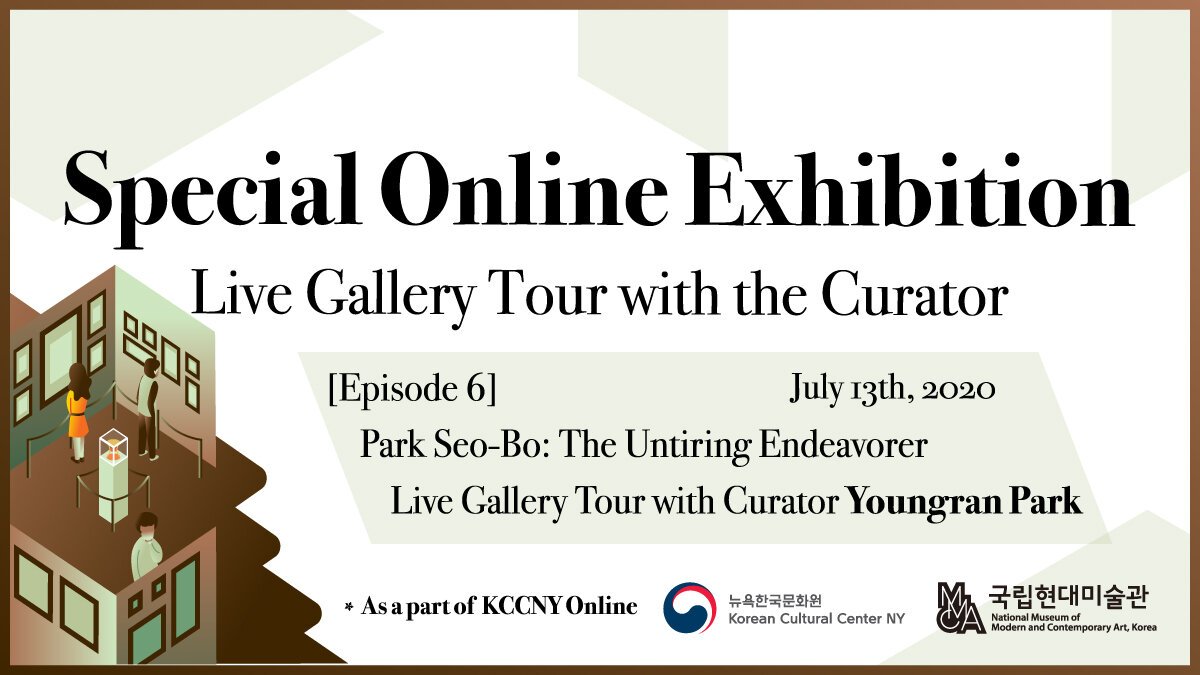 A pioneering figure in Korean abstract art, Park Seo-Bo (b. 1931) has established an artistic world all his own through his écriture series, while devoting his life to cultivating Korean contemporary art and sharing it with audiences at home and overseas as a critic, administrator, and educator.

After challenging the artistic establishment with a 1956 declaration of the anti-Kukjon, National Art Exhibition (Kukjon), Park Seo-Bo presented the 1957 work Painting No. 1, which has led to him being viewed as Korea’s first informel artist. From there, he embarked on an exploration of the relationship and meaning of material and abstraction. Through his Primordialis and Hereditarius periods and his full-scale pursuit of an écriture (E with accent) approach since the 1970s, he has guided the development of Korean abstract art, a field where he continues playing a central role to this day.

This exhibition is a large-scale retrospective surveying Park Seo-Bo’s life and artistic world, which have been driving forces for trends in Korean contemporary art. The exhibition title Park Seo-Bo: The Untiring Endeavorer refers to a career of over 70 years in painting as someone who has endeavored to use écriture (E with accent) to pursue the ultimate goal of art to heal the anguish and suffering of modern individuals .

Divided into five periods, the exhibition features more than 160 artworks and archival materials ranging from his earliest works in the 1950s to recent work from 2019. The first period is his Primordialis period . Works from this period include Painting No. 1 (1957), an expression of the anxiety, loneliness, and negative feelings caused by scarring experiences, and his Primordialis series, which is seen as a preeminent example of the Korean informel painting work that Park Seo-Bo shared after his 1961 sojourn in Paris. The second period is his Hereditarius period. Works include his Hereditarius series, which incorporate Op Art and Pop Art elements in the late 1960s and apply geometric abstraction combined with a traditional Korean color sense, and his Hereditarius series, which was inspired by the 1969 moon landing and the state of zero-gravity . The third period is his early écriture period . Works include his “pencil écriture” pieces from the 1970s, for which he drew inspiration from his young son’s unschooled handwriting to apply countless pencil lines on a canvas painted in white. The fourth period is his mid-écriture period. Dating to 1982, his work during his period has been referred to as “zigzag écriture” for its approach that involves making maximum use of the material qualities of Korean dakjongi (mulberry paper) through repeated actions of rubbing, scratching, and pushing before the paper dries. This was also the period that saw him stay away from his colorless pencil écriture work and restore color with the use of shades decocted from wormwood, tobacco, and other ingredients. The fifth period is his late-écriture period. Also referred to as Park Seo-Bo’s “color écriture,” this period dating to the mid-1990s may be seen as a premier example of emphasizing a deeper and rich color sense through the removal of any traces of the human hand and the use of sticks, rulers, and other tools to create furrow-like spaces at regularly spaced intervals.

The exhibition will also offer a first-ever look at some previously unexhibited works and two new works from 2019, as well as his installation piece Void Space, which has not been shown since 1970. The artist’s life of active efforts as an art administrator and educator supporting exhibitions by Korean artists on the global stage is also shared through various materials offering a glimpse at activities spanning the past 70 years.

Park Seo-Bo was born in Yecheon, Gyeongsangbuk-do, in 1931. After graduating from the Department of Painting at Hongik University, he joined Kim Choogsun, Moon Woosik, and Kim Younghwan in organizing the Exhibition of Four Artists and declaration of the antiKukjon, National Art Exhibition (Kukjon) in 1956. Park spearheaded avant-garde currents in Korean art and is considered the flag-bearer of Korean informel and Dansaekhwa. Having paved the way for Korea’s participation in the Biennale de Paris, he played an integral role in the exhibition of Korean contemporary art abroad as well as the introduction of Western art trends in Korea. He has been honored with the Seongnyu Medal for Civil Merit (1984), the Okgwan Medal for Cultural Merit (1994), and the Eungwan Medal for Cultural Merit (2011). He also devoted himself to education as a professor and department chair at Hongik University’s College of Fine Arts. He founded the Seobo Art Foundation in 1994.

© The National Museum of Modern and Contemporary Art (MMCA). All rights reserved.