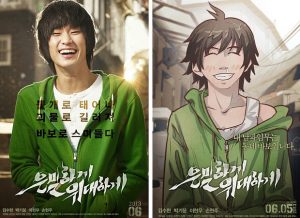 A Centerpiece Presentation of the 12th New York Asian Film Festival, and one of the most popular screenings of the past editions of KMN at Tribeca Cinemas, Secretly, Greatly is based on artist HUN’s widely popular WEBTOON of the same name. The film holds the record as the most successful Korean WEBTOON adaptation, with 7 million admissions. A group of elite North Korean spies, trained since youth, has been dispatched to South Korea where they’ve disguised themselves as a fool, an aspiring singer, and a high school student. Asian’s heartthrob KIM Soo-hyun plays Won Ryu-hwan, trained North Korean agent, but undercovers his identity as a village idiot in Seoul. A sequel to “Secretly, Greatly” WEBTOON is currently running on Daum portal.