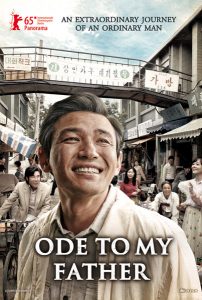 Well-known for his disaster film HAEUNDAE, the blockbuster filmmaker JK YOUN brings us this new epic melodrama, ODE TO MY FATHER. Selected for the 2015 Berlin International Film Festival Panorama, the film guides viewers through South Korea’s modern history by following Duk-soo (HWANG Jung-min)’s struggles to support his family as he endures hardships during the Korean and Vietnam Wars, and in German coal mines. This universal tale of loyalty and love is a tribute to the generation of Korean fathers who have sacrificed everything for the sake of their families, and have in process set the stage for Korea’s rise as one of the world’s leading economic and cultural powers.