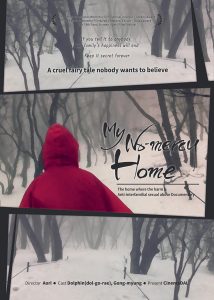 In this dark, critically acclaimed documentary, director CHOI Mikyung (aka Aori) chronicles the tragic tale of Dolphin, a young woman who had been abused and ignored throughout her life, and is now willing to use film as a positive outlet to share her troubling tale. Sexually harassed by her father and rebuked by her family, Dolphin was forced to escape from her home in order to expose the awful truth of her past. Told through dramatic footage, reenactments, and eye-opening interviews, My No-Mercy Home is the upsetting but ultimately redemptive story of a woman whose family wasn’t there for her, and her journey to create a new, supportive family on her own.