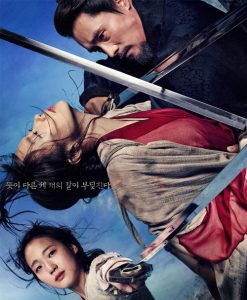 “Depicting a complicated tale of violent retribution set in the Goryeo era some thousand years ago, Memories of the Sword is a visually stunning period epic that should keep genre fans satisfied.” – The Hollywood Reporter

As the greed and excess of a corrupt monarchy threatens to destroy the once-glorious Goryeo Dynasty, three legendary warriors lead a revolt to overthrow the empire and save its people. But when deceit and betrayal costs the life of a master swordsman, a plot for justice and revenge is set into motion, raging for decades between the two survivors. Starring LEE Byung-hun (Terminator Genisys), JEON Do-yeon (winner of Best Actress award at Cannes for Secret Sunshine), and KIM Go-eun (winner of Rising Star award at the New York Asian Film Festival for Eungyo), Memories of the Sword is a lavish epic that blends tragic historical drama with thrilling swordplay and martial arts.