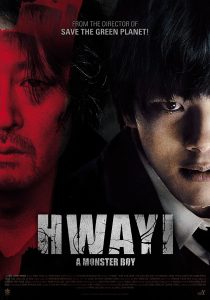 10 years since his feature debut with the fantasy thriller SAVE THE GREEN PLANET!, director JANG Joon-hwan has returned with an offbeat crime drama HWAYI: A MONSTER BOY. A gang of cold-blooded murderous criminals, led by YUN Seok-tae (KIM Yun-seok, the detective in THE CHASER ), has raised a boy Hwa-yi (YEO Jin-gu) they had kidnapped as their own, teaching him all of their know-how and treating him as their communal son. Only when the teenager learns about his past on his first mission does he turn against them and their kind, with increasingly violent, nihilistic and extremely bloody results.