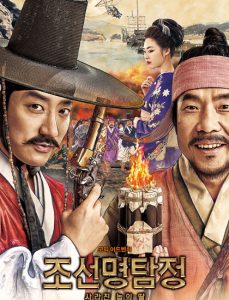 A sequel to Detective K: Secret of the Virtuous Widow, this entertaining period-action-comedy set in the 18th century continues the adventures of detective KIM Min (KIM Myung-min), the brilliant nobleman and inventor. Our hero has been assigned to investigate the influx of counterfeit silver, which threatens to destabilize the Joseon dynasty. He goes undercover in a rural village with his sidekick Seo-pil (OH Dal-soo). They encounter the adorable Da-hae, who is searching for her missing sister. No sooner than that, corpses of village girls wash up ashore. All leads point to the mysterious and devilish Dragon King Island. What will he find there?