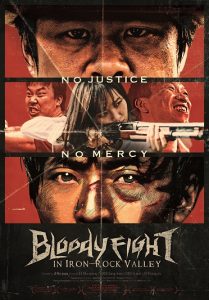 Writer/director Ji Ha-Jean turns the Korean revenge film on its head with this outlandish 2011 spectacle, featuring a wild new take on a tried and true genre. When a nameless man is sprung from prison, he embarks on a bloody, vengeful mission to take down a criminal known only as “Ghostface” – spiraling himself into a series of wild, violent quests that leaves no one unscathed. A fragmented narrative paired with a smooth jazz soundtrack makes Bloody Fight in Iron-Rock Valley one of the most surreal adventures you’ll ever embark upon.
A huge hit at last year’s 2012 New York Asian Film Festival, this $35,000 film took the prize for “Best Korean Independent Film” at the Puchon International Fantastic Film Festival and won the “Best Asian Genre Film of the Year” award from the European Fantastic Film Festivals Federation!
0 FacebookTwitterPinterestWhatsappLINEEmail
vorherigen Post